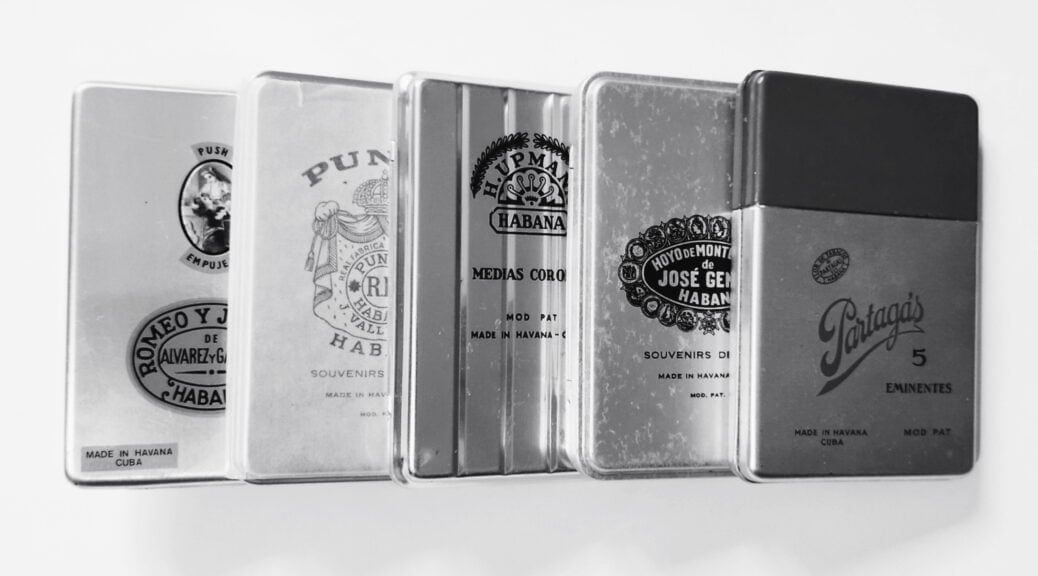 This aluminum pocket size box of 5 cigars appeared in the 1940s at the same time as the aluminum tubes. Design varies by brand. It will disappear in the 80s

These cases were packaged in boxes of 10 or 20 (see packaging).

It has been updated by HABANOS S.A. with the Linea Rétro announced in 2017 and available since 2020.

A brief overview of the original versions.

END_OF_DOCUMENT_TOKEN_TO_BE_REPLACED

Here a CUBATABACO greetings card dating from 1971. There are some beautiful Cuban rings, the #PARTAGAS is missing on the first page.

END_OF_DOCUMENT_TOKEN_TO_BE_REPLACED

Glass jars appeared in the 50’s/60’s and disappeared in the 70’s/early 80s. In 2009 HABANOS S.A. made them reappear to contain 25 H.UPMANN Noellas La Casa Del Habano edition. Here an old Punch Presidentes Glass Jar of 25 cigars (extremely rare cigars according to CCW).

Punch is one of the oldest Habanos brands. Don Manuel López de Juan Valle and cia founded this brand in the mid-19th century, with the idea of ​​attacking the growing English market, where a humorous publication of the same name was in vogue in those days.

Mr. Punch, the clown that was the symbol of that publication, continues to appear in each of the brand’s boxes with his Habano in hand, surrounded by 19th-century images that shows the making of Habanos, and that are practically the same as those that today can be seen in factories in Cuba.
Source : habanos.com