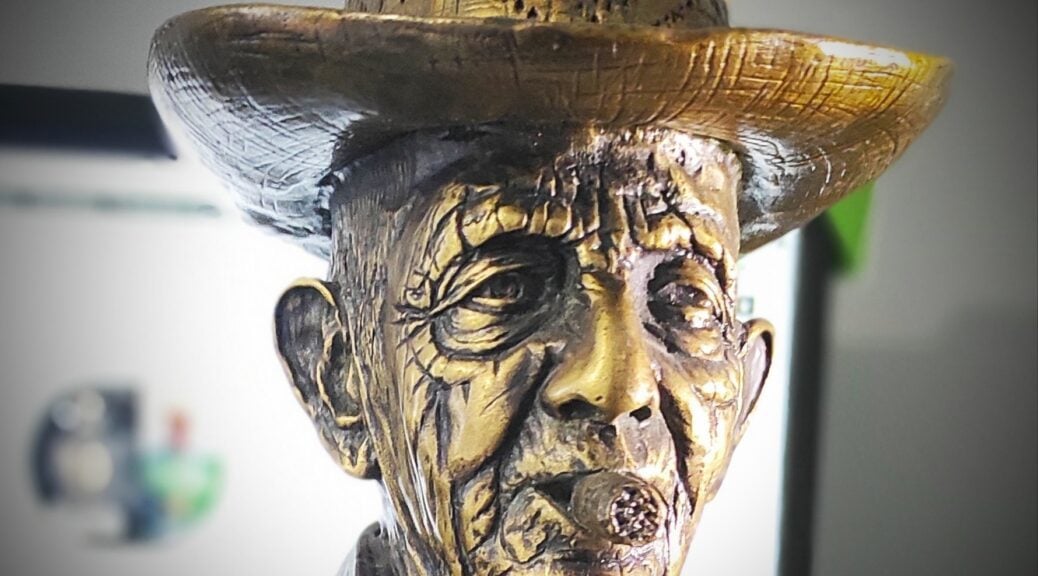 This sculpture was made in memory of the prestigious tobacco producer (Veguero) who was with us until he was 91 years old.

Bust in tribute to “Don” Alejandro ROBAINA, emblematic figure of Habanos. Designed by Nelson ALFONSO, sculpted by Ingeborg GAZI HERRERA and produced in 2011 in 91 copies for GOLDEN AGE Ltd. 91 referring to the age of Alejandro ROBAINA at his death.

Since 1845, the ROBAINA family has been producing excellent tobacco in its plantations in Cuchillas de Barbacoa (tobacco district of San Luis, in Vuelta Abajo, province of Pinar del Río).

Alejandro ROBAINA was born in Alquízar in the province of La Habana in Cuba. He grew up and lived most of his life in the family finca. In 1950 he took over the plantation where he remained an independent producer despite the Cuban Revolution of 1959, a revolution after which the plantations were absorbed into cooperatives.

The tobacco leaves from the plantations of finca ROBAINA are often considered among the best in the world and are used in the manufacture of cigars such as COHIBA or HOYO de MONTERREY. Alejandro ROBAINA has been dubbed the “godfather of Cuban tobacco”.

During the 1990s, Alejandro ROBAINA was recognized by the Cuban government as the best tobacco producer in the country.

He received the distinction of Hombre Habano del Año in 2001.

He died in 2010 on his plantation near San Luis in Pinar del Río.

In 1997, Habanos S.A. created the Vegas ROBAINA brand to honor ROBAINA’s achievements. His face becomes one of the best known in the cigars universe worldwide, he is the only cuban tobacco producer to have a brand of Cuban cigars in his name.

Since 1999 Nelson created designs for all major brands of cigars from Cuba. He published “Puros Habanos” in four languages, winning the best multimedia publication of Cuban cigars by Habanos S.A.. Nelson Directed the Spanish advertising and communication agency “Golden Age”, where he remains in charge of the image and creativity of all Premium Cuban tobacco brands.

Nelson is the graphic designer and in charge of industrial development in the art of smoking, and the designer of luxury products for brands such as Cohiba, Montecrsito, Partagas, Romeo & Julieta, H. Upmann, Hoyo de Monterrey, among others. Nelson has won First Prize for Innovative Packaging Design and Products , 4 consecutive years (2007, 2008, 2009 and 2010) at TFWA in Cannes, France, which was made for Habanos S.A. for the International Duty Free World Wide Show.

Born to Argentinian parents in Barcelona (Spain) in 1979.

She currently lives, works and teaches in the mountains of Córdoba (Argentina)”
Website : https://linktr.ee/ingeborg.

Feel free to contact us  if you have information or for any comments, and remember to subscribe to our newsletter.